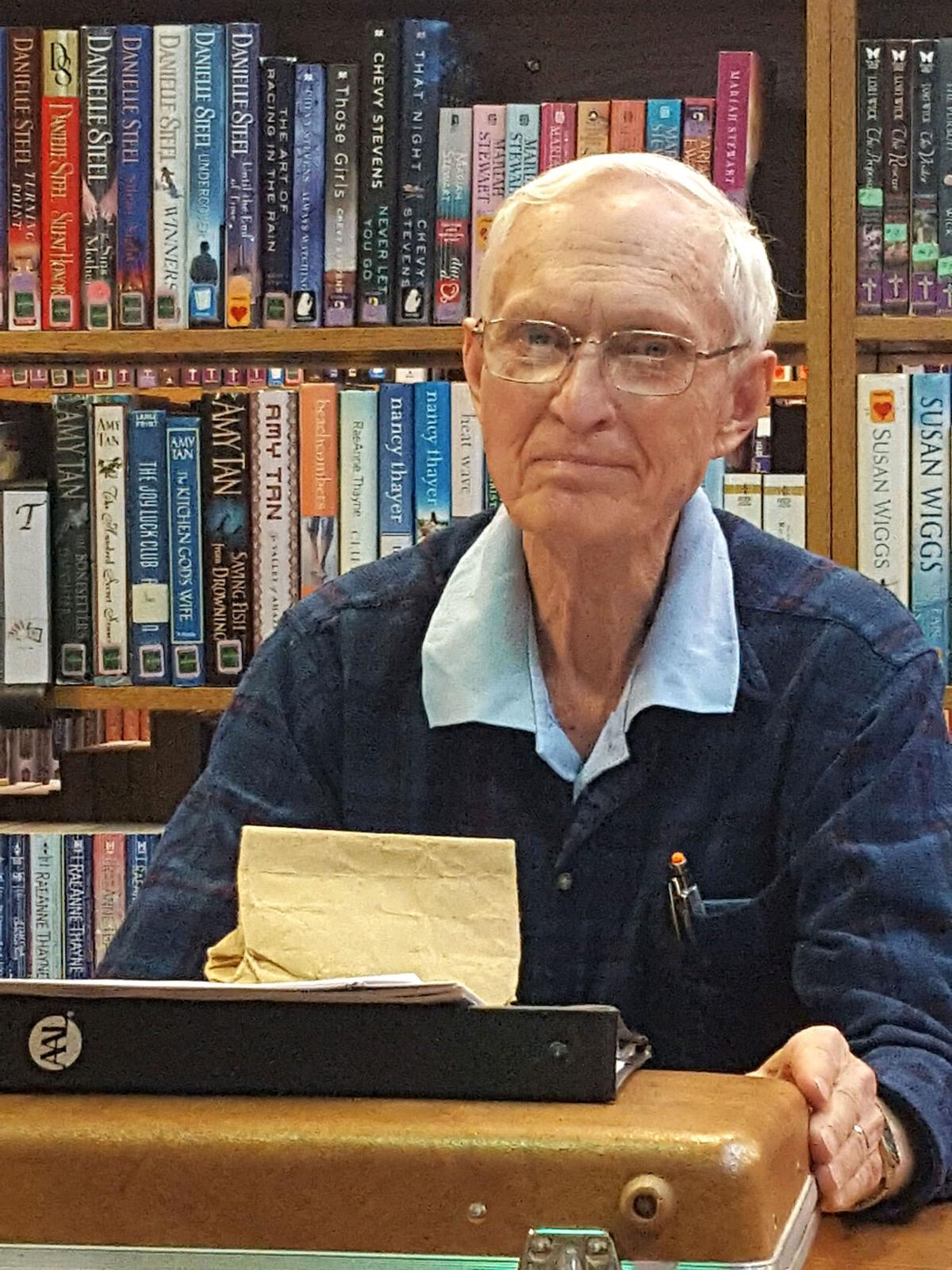 Adam Dahlman has served as the chairman of the Tri-County Water Distrist for 40 years. He retired from the board during the group's May meeting. 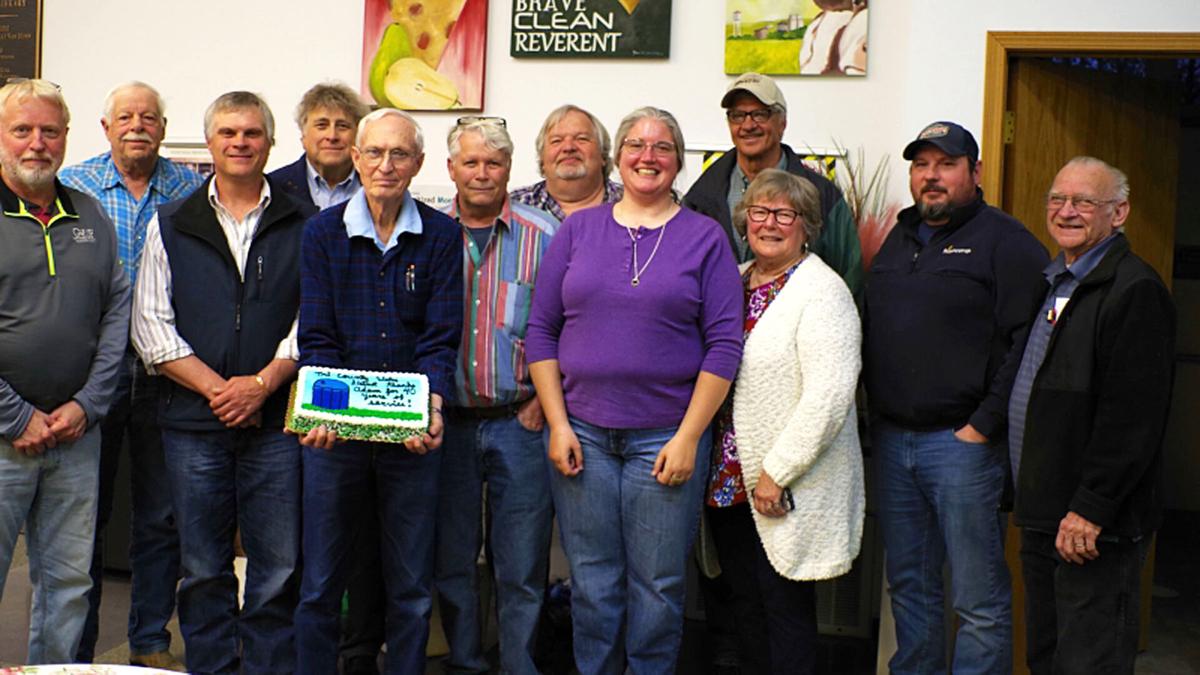 Members of the Tri-County Water District Board and several people who work with the board are pictured with Adam Dahlman following his official last meeting after serving and being chairman of the board for the past 40 years. Those pictured above, from left, are: auditor Dale Grabofsky, system operator Ken Holmes, Lee Dahlman, Erling Juel, Adam Dahlman, Chris Stephens, Bill Burguess, assistant system operator Ken Holmes, Camile Good, Mark Nelson, secretary Cathy Odden, Brent Feldmann and Dick Brandt. Not pictured is board member Stuart Bliss.

For 40-plus years Adam Dahlman, 84, has dedicated countless hours sharing his time, leadership skills and extensive knowledge as a founding member of the Tri-County Water District.

The Tri-County Water District was formed in July of 1981 with Dahlman being elected as chairman on July 10 of that year, a position he has held since. He and the first board guided the district to secure the many easements necessary to build the Tri-County Water District in Teton, Cascade and Chouteau counties with about 200 miles of service lines.

A native of Dutton and longtime area farmer who moved to Great Falls in retirement, Dahlman said the time was right to step down from the board last month. “It has been very rewarding to serve on the board,” he said. “I’m proud it is a very successful district.” In fact, Dahlman said through the years the district has been used as a success story by Montana Rural Water Systems and studied by others looking at building a district.

At the May 10 board meeting, Dahlman’s fellow board members surprised him in recognizing him for his years of service. They presented him with a collage that included pictures taken through the years and a thank you note highlighting the accomplishments of the district under his leadership.

In the thank you note they said, “Adam has a favorite saying: ‘pro-active.’ Adam and the board have been successfully being ‘proactive’ in guiding the district for the last 40 years and to building and delivering water to its members. The Tri-County Water District has worked diligently to be fiscally responsible and has even been able to lower the initial water rates. What a feat!”

Dahlman helped organize the first meeting, called by Bob Stephens, at the Diamond Valley Schoolhouse in 1978 and spent long hours locating a usable water source and helping to build the project from the ground up. In an interview with the Acantha, he explained that the Tri-County Water District started when residents living in the open area between Power and Dutton were unable to find a suitable water source. “We all wanted and needed water. We were each hauling every drop of water we used,” he said. “We understood the importance of water for our homes and families but weren’t able to pay out of our own pockets alone to find water.”

“We were working for the same goal,” Dahlman continued. “I have had the privilege of working with lots of good people from other area farmers, to construction workers and businessmen and -women.”

The district secured a water source through the generosity of Herb and Bessie Silberman. “We also had a good attorney, Rae Kalbfleisch, of Shelby who was involved in water projects earlier, that helped us navigate the requirements for the district, water rights and set up the needed documents,” Dahlman said.

Not only did Dahlman serve on the board, but he also represented the district in Minneapolis, Minnesota, to secure its bonds from First Bank of St. Paul for funding and for several refinancings until the bonds were paid off in 2001. Dahlman said that when they secured the bond, the bank in Minneapolis didn’t have a currier who was licensed to carry $1.9 million in revenue bonds. “The bank had made arrangements with Aaron Peterson with the Dutton State Bank, for he and I to talk while the bank listened in so that they were satisfied that I was who I said I was before getting the bond,” he explained.

Dahlman said he had to sign his name more than 400 times on the bonds. It took several hours with a couple breaks between to get that done. Periodically, he switched pens. The signing of the bonds made them negotiable.

Construction began on the project in 1981, and water was available west of Interstate 15 by fall 1982 and east of the interstate by 1983. Dahlman was there to troubleshoot the many day-to-day problems that cropped up during the construction and over the years of operation.

Throughout the years, the district has made other purchases and improvements. It purchased the land which is the site of the wells from Herb and Bessie Silberman in 1993, constructed a second well and infiltration gallery and pump house and booster pump in Cascade County in 2008 and built a new 250,000-gallon tank in 2017. The district has also increased the pipe size.

Dahlman has a list of accomplishments that he is proud he and the district have achieved. These are some he mentioned: each of the 174 “water taps” shares the same in the cost and water they receive; the district has never been on the tax roll; the district provides water to two Air Force control centers and Benton Lake School; and his son Lee is keeping the family tradition alive by taking his spot as a member of the Tri-County Water Board.

Dahlman and his wife of 64 years, Barbara, have two sons, Steve and Lee, and a daughter, Denise. They also have five grandchildren and one great-grandchild. The couple’s sons Steve and Lee still operate the family farm and each has expanded it. “You can never take the farm out of the country boy,” Dahlman said. That holds true when they were searching for land in Great Falls to build a home when they retired. They selected a new subdivision where they can see the wide-open space and look over the city.

He appreciates the support he has received from his wife in taking on the work of the district and many other projects over the years. “I spent a lot of time on the phone, attending meetings and meeting with neighbors in the beginning and later taking care of business for the district,” he said, adding he hasn’t ever received payment for any of his services — something he wouldn’t change.

In addition to farming, Dahlman, a 1956 graduate of Power High School, served one term as a Teton County commissioner and served 12 years on the Dutton School Board. Over the years the couple has been active in the Bethany Lutheran Church in Dutton.

The couple enjoyed the years they welcomed summer agriculture foreign exchange students. They enjoyed the exchange of culture between the students and themselves and have remained in contact with several.

He has shared his love of music with fellow residents throughout Montana. He is well known at the retirement establishments and senior citizen centers throughout Teton County along with assisted living facilities in Teton and Cascade counties, the Veterans Home and assisted living in Columbia Falls and Kalispell. Dahlman asked whether one could imagine him playing Santa Claus two times, of which Bill Erickson said, Santa was a “Vegan.” He played with a group that cut two CDs, one “good old dance” music and the other Gospel music with a Polka beat and words suitable for church.

In the end, Dahlman couldn’t be more pleased and appreciative of how successful the project has been, knowing it depends on the cooperation of a diversified group of individuals who have come together for 40-plus years, putting aside their political views and religious beliefs to simply provide much needed water. “We are all tied together for a common cause, one we have successfully accomplished, and which continues to thrive after 40-plus years,” he said.