You are the owner of this article.
Edit Article Add New Article
You have permission to edit this article.
Edit
Home
About
News
Regional News
Sports
Opinions
Classifieds
Customer Service
Weather
Calendar
e-Edition
1 of 4 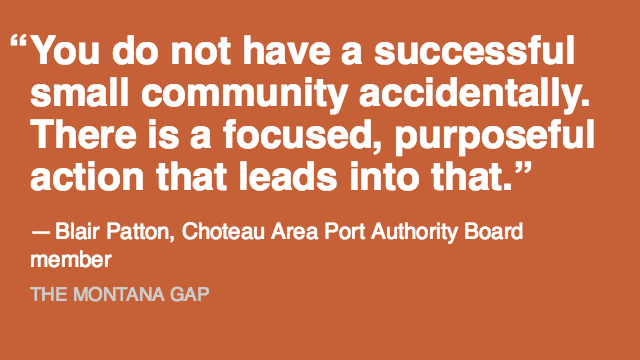 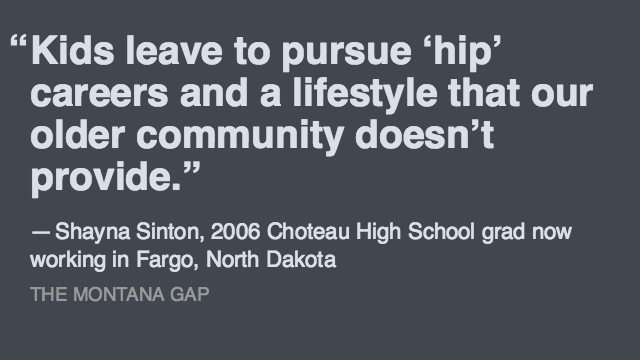 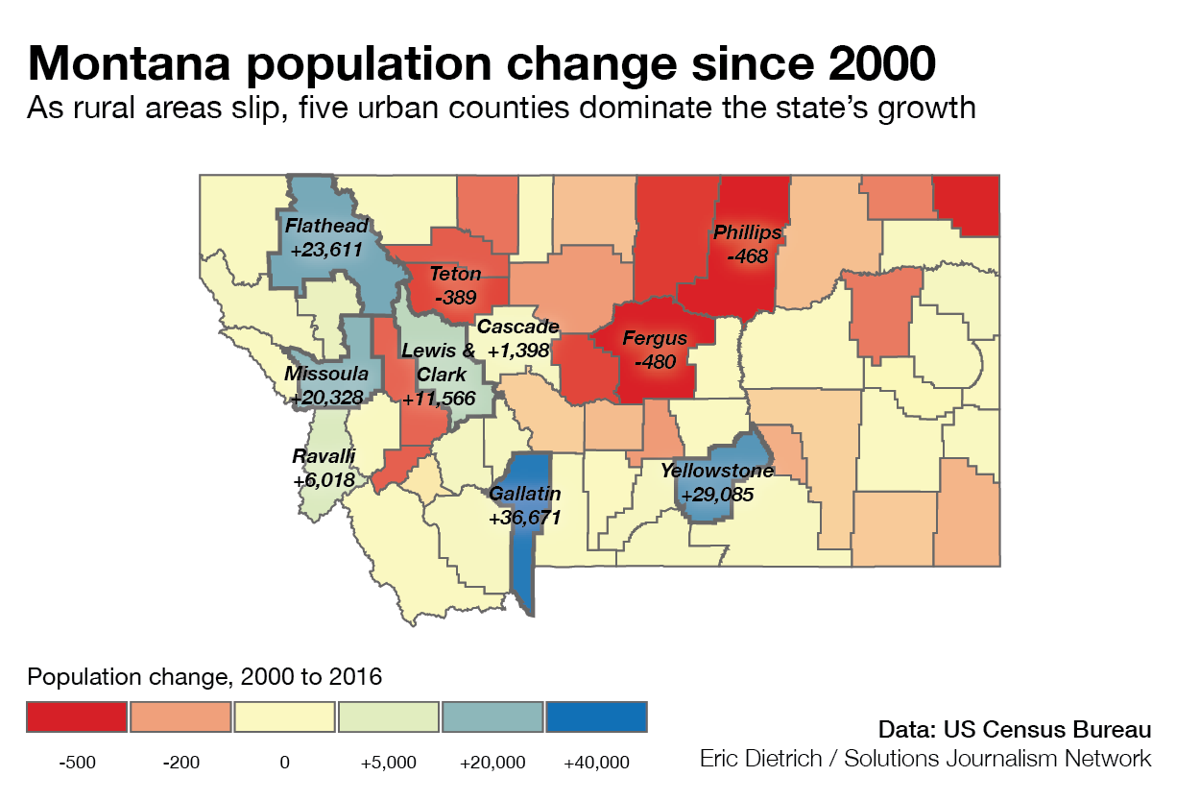 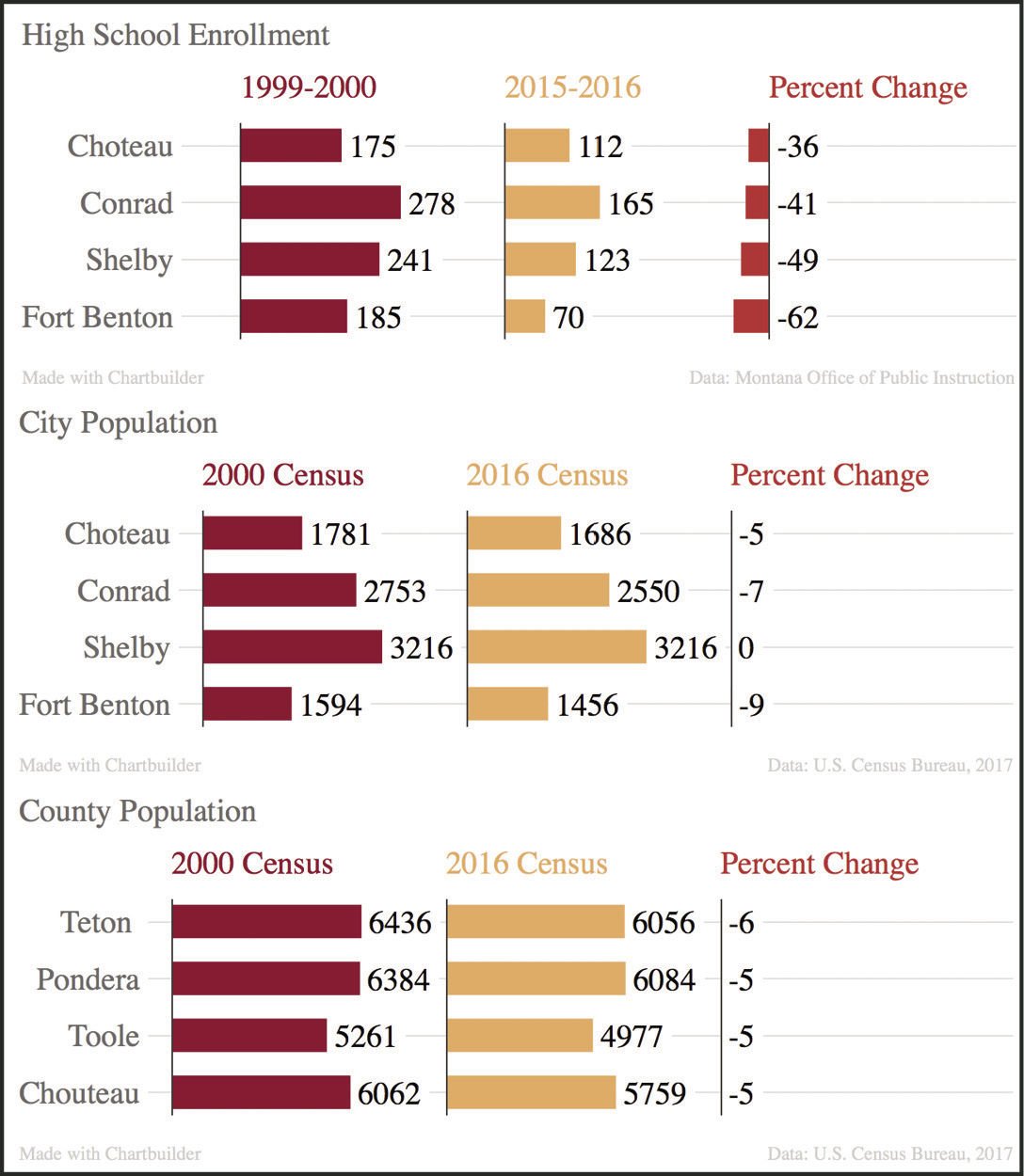 “I’m really into formulas,” says Choteau Area Port Authority board member Blair Patton. “People who are successful know the formula. You do not have a successful small community accidentally. There is a focused, purposeful action that leads into that.”

Patton returned to his family’s ranch outside of Choteau after living many years in Lewistown. He operated a sports clothing and graphics business here, served on the Choteau City Council and now runs a lawn care service. He and his wife raised their family in Choteau, where the youngest of their three children is a junior at Choteau High School.

Patton is concerned about what he sees. In 2001, CHS had 175 students and was comfortably Class B. Class C schools are the smallest in the state while Class AA schools are the largest. By the fall of 2015, the enrollment had dropped to 112 students, a 36 percent loss, falling into Class C levels. This fall, enrollment has bumped back up to about 123 students, but the prospect of CHS becoming a Class C school took Patton and much of the Choteau community aback.

Declining enrollment and population are not a surprise to anyone who has lived in north-central Montana over the past 20 years. From 2000 to 2016, Montana’s population grew by about 139,000 to reach 1,042,520, according to the U.S. Department of Commerce 2017 Bureau of Economic Analysis.

But growth has not been uniform statewide. Twenty-three of the state’s 56 counties — 41 percent — have seen no growth or negative growth over the same time. According to the same U.S. Department of Commerce analysis, from 2000 to 2016, Teton County lost 6 percent of its population, declining from 6,436 residents in 2000 to 6,056 in 2016.

If you go back to 1980, the population loss is even greater, showing a decades-long trend of shrinking populations in largely agrarian counties. The demographics of the people living in these counties are changing too.

Those population losses have gone hand in hand with declines in businesses and jobs; as jobs leave, so do parents who need to be able to make a living wage to raise their families. A major Choteau employer, the county-owned nursing home, closed two years ago. A Main Street clothing store closed in December. Since 1990, the community has also lost an animal feed plant, a meat-packing plant and the state Department of Family Services office. The state is closing its Office of Public Assistance in Choteau in mid-January and its Assessor’s Office in April.

The downward population trend and the loss of school-age children and jobs that support families are forcing Choteau and other rural Montana communities to think strategically about confronting and reversing these declines.

The Choteau community has been proactive through the years. The community partnered with Montana State University on an economic development project and with MSU Extension on an anti-poverty initiative. The city established a Revolving Loan Fund to help existing businesses and start-ups.

In September, the Choteau City Council created the Choteau Area Port Authority — a board that has statutory power to aid economic development. Port authorities are supported by property taxes, grants and other revenue and may or may not involve a “port” of any kind.

In north-central Montana, most of the counties around Teton County have already established port authorities that have been working quietly for years to encourage economic development with varying rates of success.

The City Council appointed Patton and four others to the board. While the CAPA has limited funding — about $4,000 a year from a two-mill property tax — Chairwoman Mary Sexton hopes the board can become a facilitator, helping business owners, city and school officials, workers and would-be entrepreneurs put together small-scale projects that will have lasting benefits.

That could start, as Patton says, by working toward a formula. He says figuring out why people are leaving Choteau may provide the city with ways to shore up the population, revive the economy and boost school enrollment. So the CAPA board has written surveys to ask people why they are leaving (or coming to) Choteau. The surveys, still in draft form, will ask questions of juniors and seniors in high school, travelers staying at Choteau’s motels, and people moving into or out of the city.

“Right now everyone is speculating,” Patton said. “We are kind of filling in the blanks without asking the questions. I think it’s really important to start collecting the data we want and that is constructive.”

Sexton said she hopes the data from the surveys will allow the CAPA to be more strategic in how it helps with economic development opportunities. “You can do a flock shoot, but that’s kind of ineffective,” she said.

U.S. Census data shows that many of those leaving rural Montana are the young people, the high school graduates who leave to pursue post-secondary education and don’t come back. These are people like Shayna Sinton and Scott Corey.

Sinton graduated from CHS in 2006 and went to North Dakota State University in Fargo, where she earned a degree in apparel and textile design. She now works as an insurance agent in Fargo, and she is among the 63 percent of Montanans who have college degrees who no longer live in state, according to the University of Montana Bureau of Business and Economic Research’s 2017 Montana Economic Report.

Sinton says she wanted to spread her wings and see the world. She and other students who leave Choteau to go to college subsequently find jobs that are different and, quite frankly, pay more, she said. “The job market in Choteau doesn’t appeal to a younger crowd,” she said. “Kids leave to pursue ‘hip’ careers and a lifestyle that our older community doesn’t provide.”

She misses the idyllic childhood she had in rural Montana but now loves the variety of activities that the larger, more diverse community offers.

Corey, a 1977 CHS graduate, grew up on a farm and never planned to leave. After earning his first degree, he tried for six years to find a way to stay, but in 1987, he returned to MSU and earned a degree in music education.

He started working in Class C Simms, then moved up to Class B Colstrip and in 1995 was hired as the choir director at Class AA Billings Senior High School in the state’s largest city. He is now the coordinator of music and art for Billings Public Schools.

“I never had a desire to move to Billings or to a larger city at all,” he said. “I would have been happy in the small towns for my career.” But, he said, he learned that working with a larger pool of students would mean greater professional accomplishments.

Someday, if the timing were right, he would love to return to Choteau. In November, he was here as the guest conductor of the North Central Honor Choir, made up of Class B and C high school students in the region. “Stepping out of the front doors of the Stage Stop Inn and having that view of Ear Mountain brought back many amazing and wonderful memories,” he said. “I was home again. … I didn’t realize just how strong that pull would be on my heartstrings, but it certainly gave me a solid yank.”

In addition to launching its own surveys, the CAPA board is also working with the Montana Economic Developers Association to have a Resource Team Assessment done here sometime in early 2018.

MEDA, through a contract with the Montana Department of Commerce, does assessments in communities to gather information that can be used for projects.

Gloria O’Rourke of Anaconda, the executive director of MEDA, has many examples from the 46 assessments MEDA has done.

Lockwood created a pedestrian district to improve safety for children walking to school. In Anaconda, the assessment led citizens to establish the Anaconda Community Foundation that has granted more than $170,000 to local nonprofits since 2008.

Townsend used its assessment to drive a beautification project while West Yellowstone developed an education program that would bring people to the community in the off-season, for example.

While there is no element of the MEDA assessment that specifically addresses rural population decline, O’Rourke said, “We are realizing that there is that horrible drain of our youth in our communities.”

Communities that have realized the importance of bringing back youth are trying to actively educate youth about entrepreneurship and to help them invest in their communities before they leave.

For example, she said, Havre has a leadership program that involves youth in local government at the county level. Other schools and communities foster student involvement in entrepreneur programs like the Distributive Education Clubs of America, now known simply as DECA.

Some communities, she said, access the Montana Department of Labor’s apprenticeship program that helps match business owners nearing retirement with apprentices who will eventually buy their companies.

And, in some communities, organizations that award scholarships require the recipients to dedicate time to working or service in their hometowns.

Having done Resource Team Assessments for rural communities, MEDA President Paul Tuss of Havre says it is “super obvious” to him that the selling points of these rural communities are the intangibles — safety, lack of a commute to work, knowing your neighbors and not having to deal with the hustle and bustle of city life. The qualities that really define rural Montana can’t be put on a spreadsheet, he said.

“If you can marry a superior and superb quality of life with the reliability and convenience of strong infrastructure, including internet connections and fiber connections, places like Choteau and Fairfield and Cut Bank and Shelby, become far more relevant and attractive for business development than they would be otherwise,” Tuss said.

But, he said, Choteau has to find the “formula” that Patton talked about for itself and that takes people who are willing to work hard.

For Choteau that likely means taking a tough look at the answers generated by the CAPA surveys and then using that data to encourage economic development that will keep young people and families here and give those who have left a viable way to return.

“No one is going to come in and save us,” Tuss said. “We really have to rely on each other to make these communities the best that they can be.”

This story is part of the Montana Gap Series, produced in partnership with the Solutions Journalism Network, the High Country News and a dozen Montana newspapers, including the Choteau Acantha, and Montana PBS.

THE MONTANA GAP: Tourism has given Philipsburg new life — but brought few families

PHILIPSBURG — As the holiday season gets its start on a clear morning in late November, Main Street here looks like something out of a Hallmar…