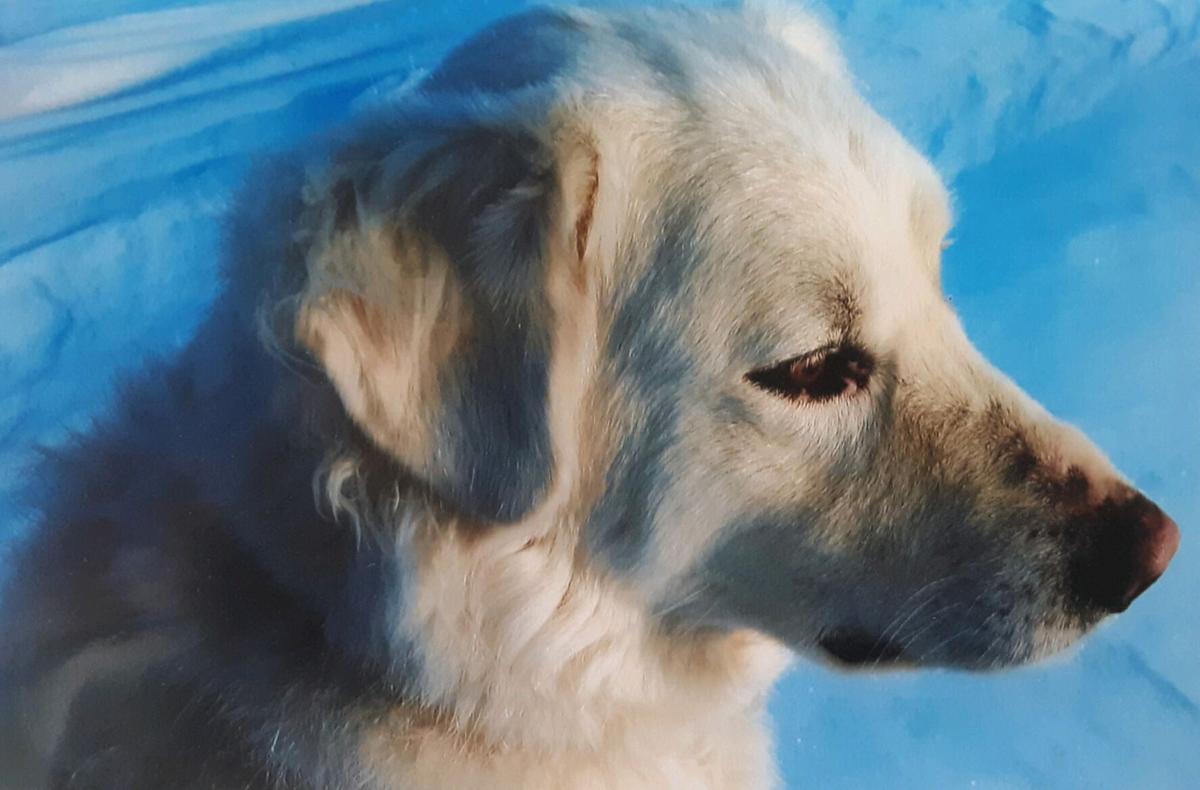 Shadow, a Great Pyrenees and Anatolian Shepherd cross who turned 10 on June 24, is retired for now enjoying his days on a farm outside of Vaughn. 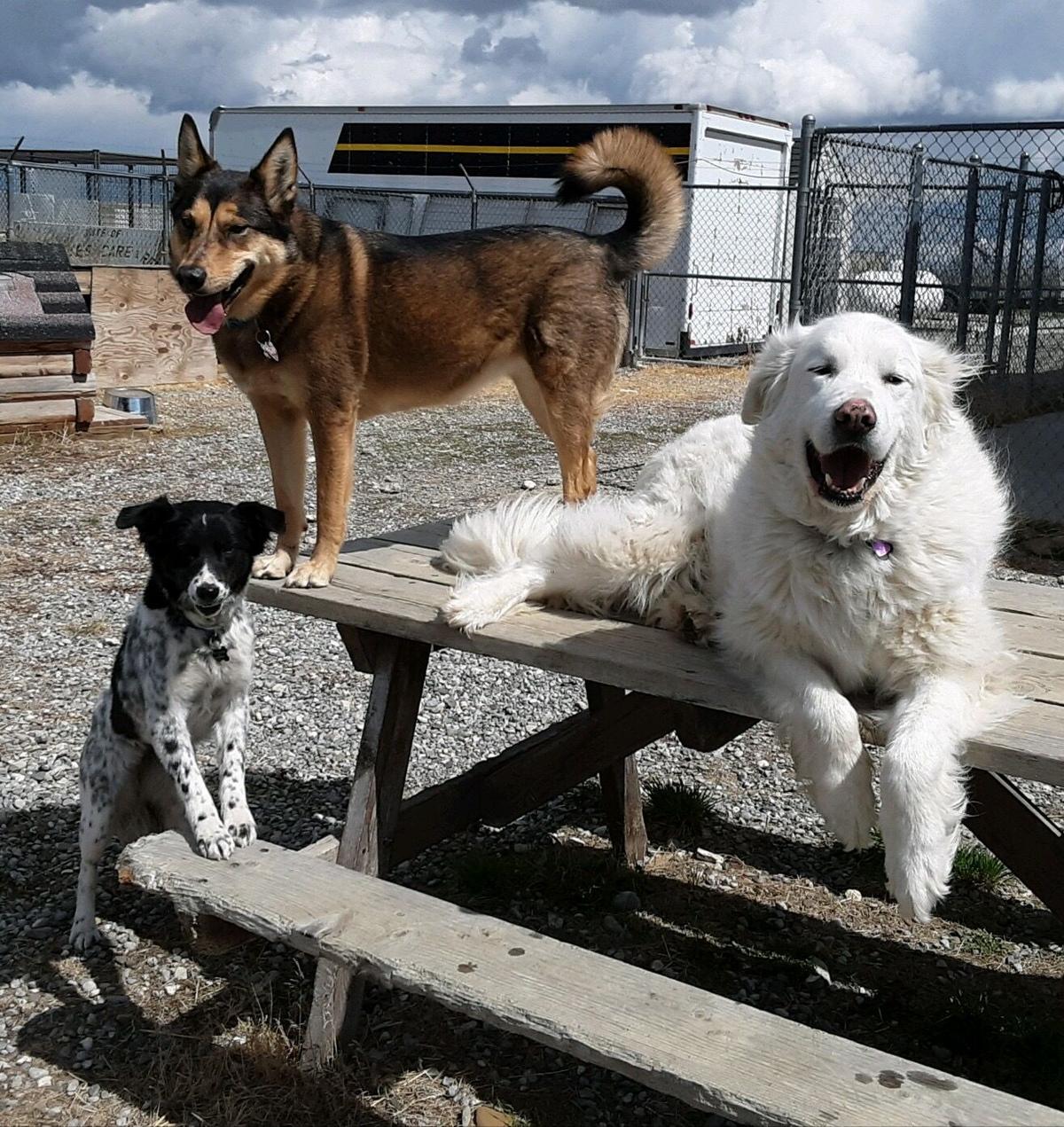 Shadow, the big fluffy dog on the picnic table, enjoys time in the sun with some of his buddies at Bright Eyes Care and Rehab Center on the edge of Choteau.

Shadow, a one of a kind therapy dog who has brought joy to many in the Choteau area, has now retired to enjoy his senior years on a ranch near Vaughn.

A Great Pyrenees and Anatolian Shepherd cross who turned 10 on June 24, Shadow made his last community visits on March 11. He visited the Choteau BeeHive, Choteau Activities, Benefis Teton Medical Center Extended Care and the Choteau Elementary School “Kids in Need.”

Because of the coronavirus pandemic, all other visits were abruptly halted to protect the many folks he visited weekly.

Rick Kerr of Choteau, who became his handler, first encountered Shadow during the winter of 2013 volunteering at the Bright Eyes Care and Rehab Center. “He had just been returned for the fourth time from another failed adoption trial,” Kerr said. “His rap sheet included wanderlust, lack of interest in hanging out with goats and being overprotective between family members and visitors.”

“Having an animal behavior background, I reasoned that Shadow’s troubled youth involved the lack of understanding his breed,” Kerr said. “I also realized in short order that Shadow had adopted Bright Eyes as his home. His disposition among multiple care givers and fellow dog residents was one of ease and gentleness. After all, he received two square meals a day at Bright Eyes, had a large fenced area to guard against noisy trucks, motorcycles and farm equipment along Highway 221 — as well as an occasional jogger — plenty of dog friends to watch over, and an array of good-hearted volunteers to give him warm human attention.

Kerr said Shadow’s time at Bright Eyes prepared them for their venture as a therapy team. “I always gave the dogs at Bright Eyes special attention to their individual emotional needs, forming special bonds with each and every one of them,” he said. The bond that formed between Shadow and Kerr was exceptionally strong.

Due to timing, Shadow and Kerr were not able to go through the official training of the American Kennel Club’s, so he decided to wing it and take the test for Shadow’s Canine Good Citizenship (CGC) Certification. “All I knew before we tested was that I thought Shadow would come to me when I needed to call him,” Kerr said. “As I assisted in testing the other dogs at the Choteau Weatherbeater, Shadow was stretched out and sleeping soundly in the back of my 1991 Subaru wagon. I was obviously more nervous than he.”

Kerr said he and Shadow tested last. “To my total amazement, and to make a long story short, Shadow not only came when I called him from across the arena, he aced all 10 tests flawlessly to receive his CGC Certification,” Kerr said. “I felt like a proud dad!”

Through the next seven years, Shadow and Kerr made nearly 14,000 visits to the more challenged, confined and young community members. “We have made many memorable friendships and moments through the years,” he said. The greatest rewards have been measured in thousands of smiles, pets, hugs and compliments for Shadow, “the Gentle Giant.”

Sandy Morris, the business manager at Choteau Activities, was sad to hear Shadow is retiring. She said of course he hasn’t been visiting given the current health concerns but has been a popular visitor in the past. “Several residents looked forward to Shadow’s visits,” she said. “It is good for the residents to interact with such a friendly dog, they don’t often have contact with animals. Shadow has always been so easy going around the residents.” Morris also said that his handler has been so accommodating and easy to work with in scheduling visits and handling Shadow when they did visit.

Benefis Teton Medical Center Extended Care residents Lynn Jennings and Elsie Pelzman both have fond memories of Shadow and have always enjoyed his visits. Jennings said he was nice, fluffy and sweet, and Pelzman said he is a nice dog and very friendly.

Shadow has supported Bright Eyes’ fundraisers by greeting participants, most notably at the Fourth of July bake sales. He has also greeted at the Summer Festival in the Choteau Park and at Bright Eyes fall dinner and dance.

In the spring, Shadow has greeted classes of preschoolers and grade schoolers visiting Bright Eyes.

The following summarizes the priceless value of the “gentle giant” over the years, said Kerr. He has been: Bright Eyes guard dog, comforter to abandoned and surrendered dogs, socializer of new dog residents, blood donor for dogs in need, protector of small dogs from avian predators, classroom inspiration, therapeutic friend of people, young and old, dog friend to cynophobics and Bright Eyes greeter and ambassador.

In 2019, after losing their Great Pyrenees, a breed knowledgeable and caring couple out of Vaughn offered a retirement home/ranch for Shadow. Shadow’s retirement adoption was a “soft” one performed over a month’s time, Kerr said. “He made several visits to his new ranch while still living at Bright Eyes and his new guardians visited him several times at Bright Eyes,” he said.

Shadow and Kerr kept their weekly visiting schedule and that also helped make his transition to the ranch go smoothly. “Living residentially, I could never give Shadow the acreage he needed to live robustly,” Kerr said. “Otherwise, I would have proudly and happily offered him a retirement home in Choteau. Meeting his needs has always been a priority of mine. His age now limits his ranch wanderings to an acceptable range, and he has a few bird dog (setters) friends and a cat buddy.”

Kerr believes he is relatively happy. “I have visited him a few times since the coronavirus halted our weekly visitations,” he said.

Ironically, Kerr said at a time when residents, staff and students would benefit the most from Shadow’s uplifting visits, we had to cease our therapy visits to health concerns with COVID-19. “This was hard on the psyche of the therapy team, which has worked together every week (except during bad weather and muddy paws) since June of 2013,” he said.

The future is always unknown territory, Kerr said, but fingers are crossed for a record timeframe in the development of a COVID-19 vaccine. “Shadow and I will try to pick up where we had left off visiting, as long as he is able and willing to jump up into the Subaru wagon,” Kerr said.