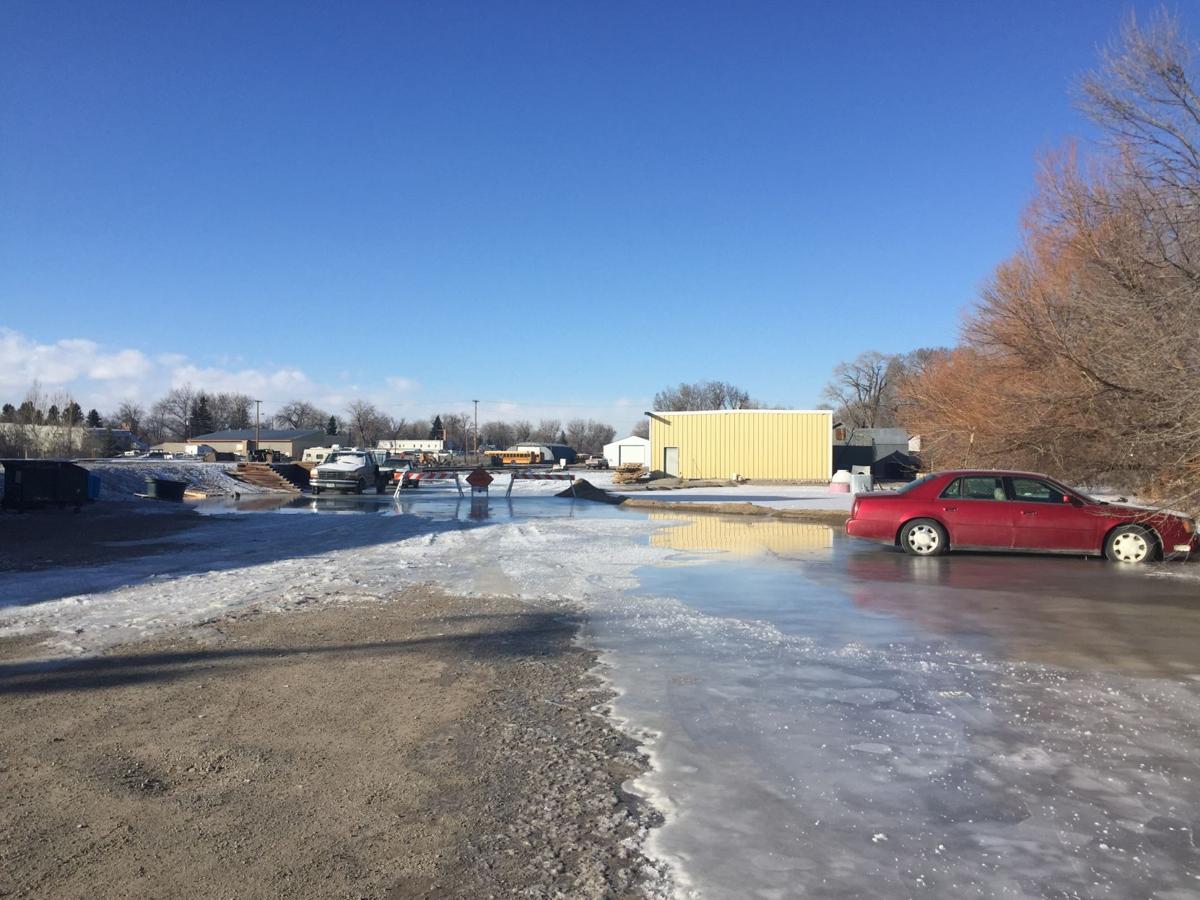 The city of Choteau today closed off a "cut across" from Front Range Supply on First Street Northeast north to the Breen Oil Warehouse because of ice and flood water coming out of Spring Creek. 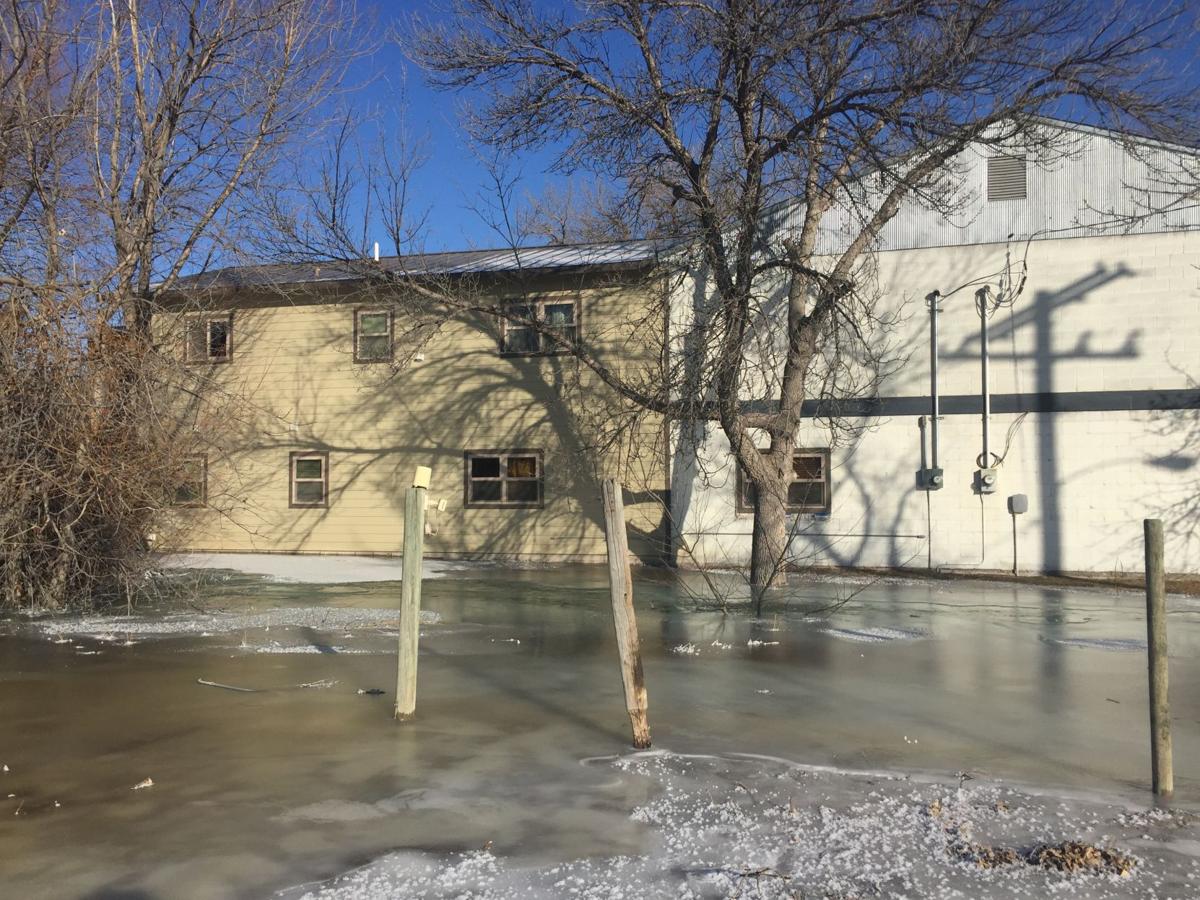 Spring Creek is out of its banks on both the east and west sides and is lapping at the west side of the former New Holland shop building, which now houses The Jagged Edge Salon, East Side Fitness gym and apartments. (Acantha photo by Melody Martinsen) 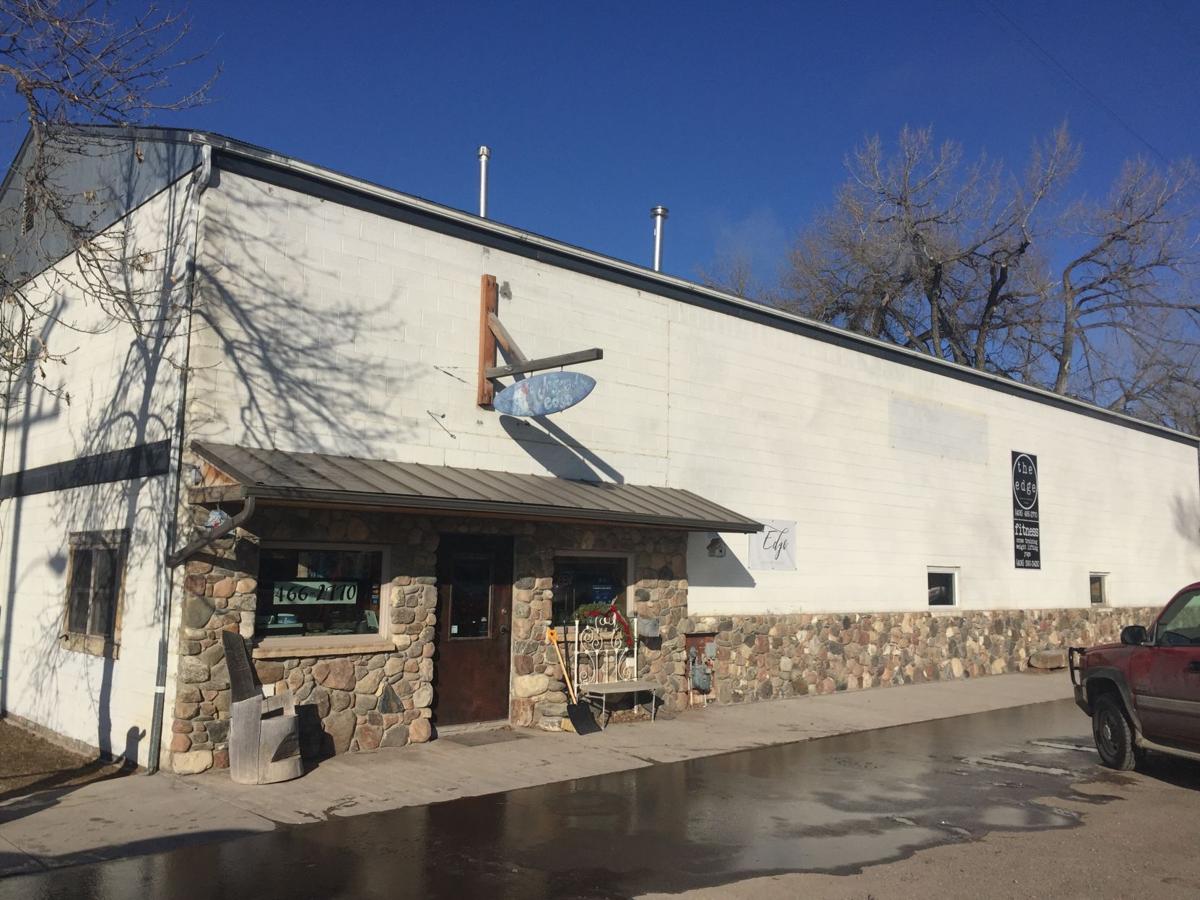 Flood water from ice-jammed Spring Creek is now all the way around The Jagged Edge building on First Street Northeast. (Acantha photo by Melody Martinsen) 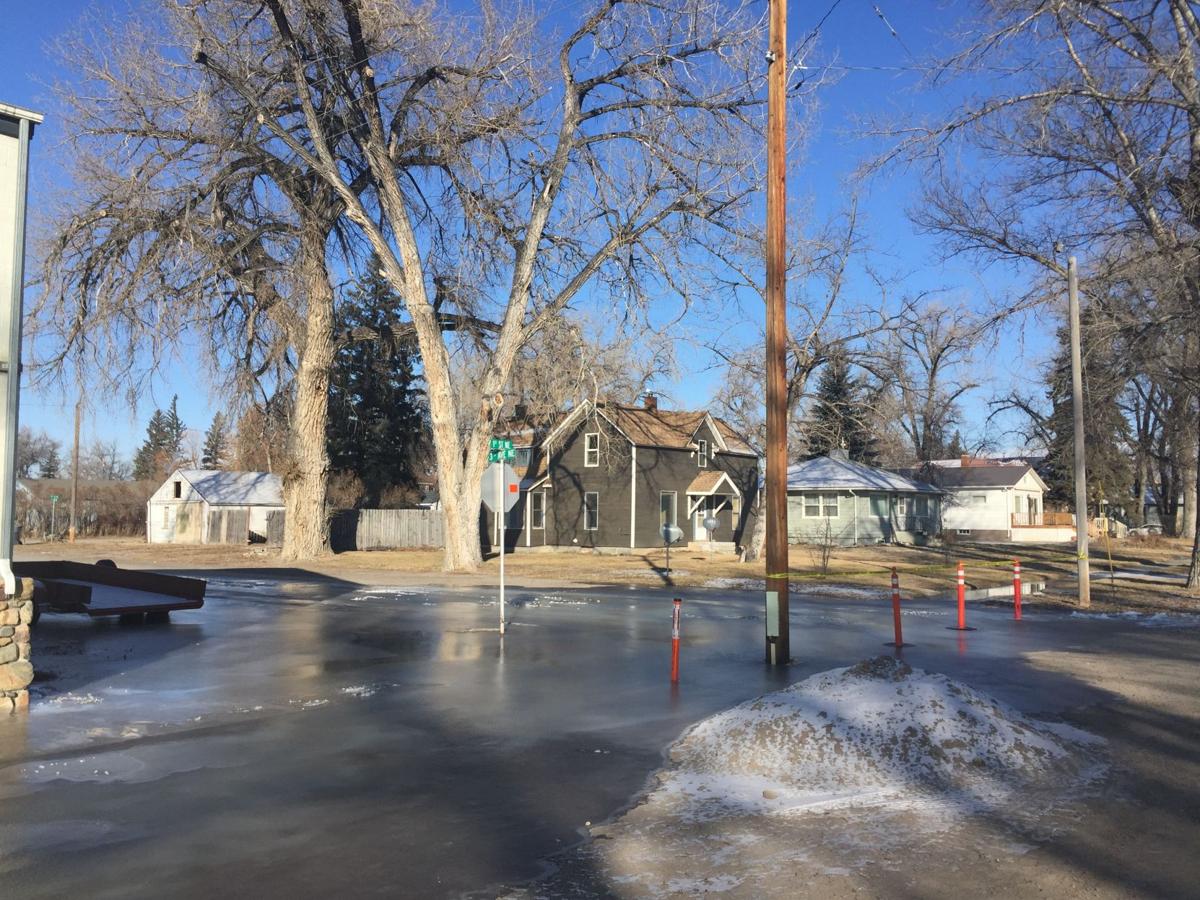 The city of Choteau has closed Third Avenue Northeast to through traffic because of floodwaters from Spring Creek. (Acantha photo by Melody Martinsen)

The city of Choteau today closed off a "cut across" from Front Range Supply on First Street Northeast north to the Breen Oil Warehouse because of ice and flood water coming out of Spring Creek.

Spring Creek is out of its banks on both the east and west sides and is lapping at the west side of the former New Holland shop building, which now houses The Jagged Edge Salon, East Side Fitness gym and apartments. (Acantha photo by Melody Martinsen)

Flood water from ice-jammed Spring Creek is now all the way around The Jagged Edge building on First Street Northeast. (Acantha photo by Melody Martinsen)

The city of Choteau has closed Third Avenue Northeast to through traffic because of floodwaters from Spring Creek. (Acantha photo by Melody Martinsen)

The city of Choteau on Wednesday afternoon (Jan. 22) lifted a boil order for city residents who get their drinking water from private wells.

The city had put a boil order into effect last week for homeowners using private wells after determining that rising groundwater in some basements had the potential to contaminate well heads also located in those basements and/or crawl spaces. The high groundwater resulted from ice jams on Spring Creek in the city and possibly north of the city on the Teton River

The boil order did not apply to anyone who receives their water from the city’s water distribution system which has not been compromised by the high groundwater and localized flooding along Spring Creek.

Mayor Chris Hindoien said that consulting with Teton County Sanitarian Austin Moyer and Teton County Public Health Director Melissa Moyer, they determined that the threat to private wells from groundwater/wastewater contamination has diminished. “Those with domestic wells that may be affected should continue to do visual inspections of your well head. Test your water if the well has been compromised by flood water,” the city said in a notice sent out to Choteau residents’ cell phones using the Code Red emergency application. The city also updated its Facebook page with the notice and notified the Choteau Acantha of the change.

Hindoien said results from the second round of tests done on five wells in various areas of town showed no presence of the E. coli bacteria. One of the five wells has tested positive twice for Coliform bacteria and the homeowners are taking steps to treat the well so that the bacteria are killed.

Choteau residents can contact Austin Moyer, the county sanitarian, at 466-2150 for sample bottles and directions on how to take a sample and have it sent to a lab in Helena for testing.

The city of Choteau on Jan. 18 issued a boil order for all residents who get their water from individual wells, directing those homeowners to boil their water before using it for cooking or drinking. Hindoien said people on the city's water system do not have to boil their water. Despite the influx of groundwater and localized flooding along the east side of Spring Creek, the city's water supply is being tested daily and is showing no signs of contamination, he said.

Hindoien said the city consulted with the Montana Department of Environmental Quality and the Teton County Health Department and sanitarian and is following the recommendation of those agencies to issue the boil order. Warming temperatures on Sunday allowed the city and the Montana Department of Transportation to clear out ice jams at the culverts on First Street Northeast and First Street Southeast, allowing Spring Creek to flow again and mitigate surface flooding.

However, he said, the groundwater level is so high in town that more than 50 homeowners are reporting water coming into their basements and crawl spaces from the ground. The city has had homeowners from all quadrants of the city report groundwater flooding in their homes, he said, and because of that the city-wide boil order was issued. Originally, the city only directed well owners in the northeast quadrant of town to boil their water, because of concerns that the water people are pumping out of their basements into their yards and city streets could contaminate drinking wells.

The mayor also said that he is working with the Teton County Health Department to be able to provide sample bottles so that homeowners can test their well water to see whether any contamination has occurred. Those tests need to be processed at a state lab in Helena.

Hindoien also said that city crew members, including Public Works Director Mike Maples, will be working on the Monday holiday (Martin Luther King Jr. Day), to continue to respond as needed to the ice-jam caused flooding. He said the city's sewer collection lines on the northeast side of the city continue to run at maximum capacity because of groundwater seeping into the lines. One manhole near the baseball complex has begun leaking, he said, the city crew has sandbagged the manhole to contain the leak, and the city has notified DEQ of the situation and is following all recommendations from DEQ.

On Jan. 17, Hindoien declared a state of emergency in the city because of ice-jam created flooding along the east side of Spring Creek. Hindoien updated city residents on the city’s Facebook page, announcing that the city had closed Third Avenue Northeast from First Street Northeast (the Dutton highway/Secondary Highway 221) north to the city limitsand the side streets into Third Avenue to all through traffic. “Please, if you don’t live over there, steer clear,” he said.

The city has also closed off the “cut across” from Front Range Supply on First Street Northeast north to the Breen Oil Co. warehouse on the west side of Spring Creek because of water and ice.

Hindoien told the Acantha that declaring the natural disaster-related emergency will open the door for the city to receive, if necessary, help from the state Disaster and Emergency Services. He also said that he has briefed the Montana Fish, Wildlife and Parks fisheries biologist in Choteau about the situation. MFWP gave the city permission to use equipment to clean out the ice buildup on First Street Northeast yesterday, but with the continuing below-zero temperatures, the ice came right back.

The flooding is occurring because Spring Creek ice is clogging the flow at three sets of double culverts on Third Street Northeast, First Street Northeast and First Street Southeast. The bed of the creek is also choked with vegetation, including many small trees that grew there during the many drought years of the past two decades, when Spring Creek only ran intermittently.

Hindoien said the city needs to explore whether funding could be obtained to replace the double-culvert crossings with box culverts or bridges that would not be susceptible to ice jams in the future, and needs to work with FWP and the Department of Natural Resources and Conservation to see whether a stream-bed cleaning project could be done.

Hindoien said more than 50 people in Choteau are now reporting groundwater in their basements and crawlspaces. One resident who lives just a block off of Spring Creek had no water in her crawlspace last night, he said, and two feet by this morning. Many residents are running sump pumps and have no choice but to send the water out into their yards and the streets. There is a sizeable ice slick now on First Avenue Northwest between Fifth and Sixth Streets because of a sump pump.

“Concern is that the water on the east side of the building cannot cross over First Street Northeast so it will have to go east into the residential areas before finding a natural low spot to work back to Spring Creek,” Hindoien said. “Please understand that things may get worse before they get better.”

As of 2:30 Friday, the slowly spreading flow of ice was creeping east in the parking lane parallel to Highway 220.

Ice began building up in the creek last week and the sub-zero temperatures on Monday and Tuesday caused major ice build-ups at the culvert crossings.

The city is continuing to work with local and state officials to respond to the localized flooding and is updating citizens on the situation on the City of Choteau Facebook page. The city has a limited number of sandbags available. Residents should contact the city office at 466-2510 if they need sandbags.

Maples took action on Jan. 11, when ice build-ups underneath culverts in the City Park caused the creek to breach its banks. He called out the Choteau Volunteer Fire Department and members then helped break up the ice jam and the creek’s level dropped a foot byJan. 12.

On Jan. 14, Hindoien notified citizens that at about 10 a.m., the Spring Hill river gauge on the Teton River upstream of Choteau indicated icing conditions were occurring on the Teton River. In January and November of 2019 shortly after similar indication, the groundwater in Choteau rose significantly and quickly, inundating many basements and crawlspaces.

Hindoien and Maples said that any residents who experienced basement flooding during November or January, 2019, could experience it again under these conditions. They asked anyone who does have basement or crawlspace flooding to report it to the city office.

On Jan. 15, the city crew built a dike of gravel on the south and west sides of the railroad tracks that parallel Spring Creek as it crosses Third Avenue Northeast to prevent the ice flow from running across Third Avenue. Third and Fourth Streets Northeast are both very icy.

By Jan. 16, the flooding creek and the accompanying rise in the level of groundwater began impacting the city’s wastewater collection service. Maples reported that sewer lines on the northeast side of town are running at 100% capacity due to groundwater and surface water infiltration.

While the city crew has sandbagged manholes in the area to reduce the amount of surface water getting into the sewer system, Maples said the city cannot control the groundwater infiltration.

Hindoien said residents who live in the area should be aware their sewers may be slow to drain or backup and suggested the following cautionary measures:

•Try not to run concurrent loads on the system, in other words, only use one water-using appliance at a time.

•Conserve water. Do not immediately flush liquid waste, but do flush solid waste down toilets.