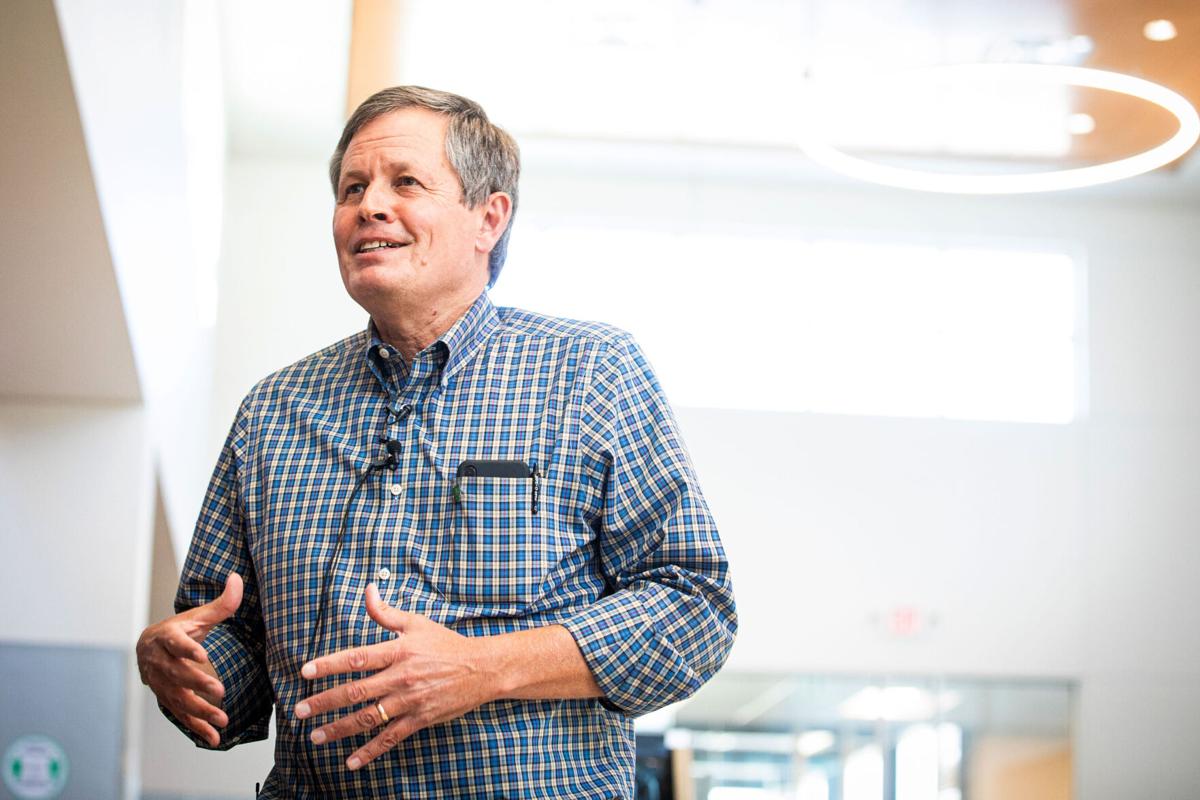 Montana republican senator and incumbent candidate Steve Daines during a campaign event at Hellgate Middle School in Missoula on Sept. 4, 2020. 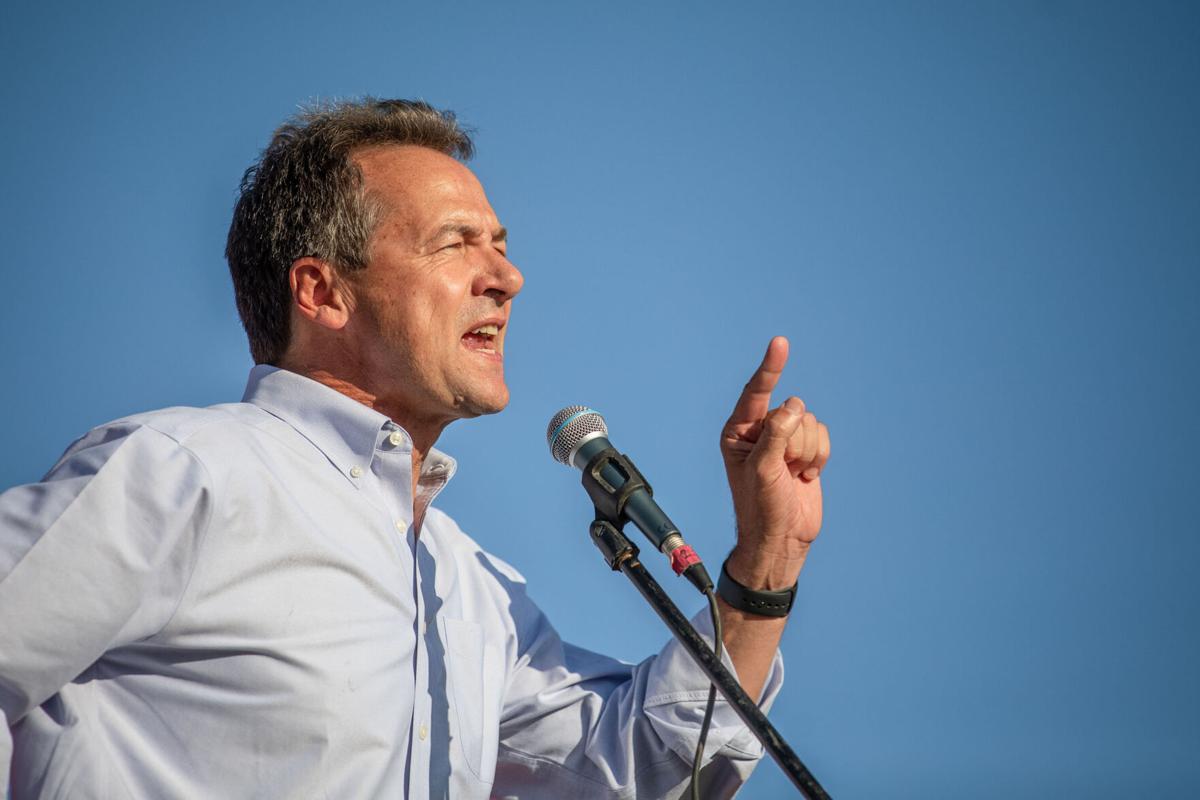 Montana Governor and candidate for U.S. Senate Steve Bullock speaks over the radio to a gathered socially-distant audience in cars during the 'Drive-In Feed' hosted by Montana Democrats at the Little Shell Cultural Center near Great Falls, Montana on Sept. 4, 2020.

Montana will not play much of a role in the battle between President Donald Trump and former Vice President Joe Biden, but in the fight to control the U.S. Senate, the clash between Gov. Steve Bullock and incumbent Sen. Steve Daines looms large.

Daines, a Republican, seemed likely to cruise to re-election until the Democratic governor announced on the last possible day his decision to enter the race. Nationally, Democrats hope to pick up four seats in the 2020 election to take control of the Senate for the first time since 2015.

Recent polling suggests the race is a statistical dead-heat, with Daines often having a narrow lead, but less than the margin of error. The reputable Cook Political Report has labeled the race a “toss up.”

The race’s national importance has opened the floodgate to money from outside the state and the race seems likely to shatter all previous records.

“A lot of the people who care about the Senate race and are spending a lot of money don’t care about Montana necessarily,” Jeremy Johnson, a political scientist from Carroll College, said. “There is a lot riding, in terms of national power, on this.”

The death of Supreme Court Justice Ruth Bader Ginsburg and confirmation fight over conservative Judge Amy Coney Barrett to replace her has only intensified the attention on competitive Senate races around the country. Outside groups like the Sheldon Adelson-backed, Republican-leaning Senate Leadership Fund and the Democratic-tilted Senate Majority PAC are pouring millions into attack ads aimed at deciding this pivotal contest.

And while the campaign is awash in money, the two candidates have fought to accentuate their differences and make their case not about the politics of Washington, but about issues in Montana. One of the most significant has been how the state and the government has handled the COVID-19 pandemic.

Bullock has been a constant presence as he guided the state response to the crisis, including issuing statewide mandates about wearing masks and how schools were to re-open. He also has also handled distributing some $1.25 billion allocated to Montana from Congress’s Coronavirus Aid, Relief, and Economic Security (CARES) Act.

Daines criticized the governor in a recent interview, saying that Bullock hasn’t been distributing the money across the state quickly enough.

“That’s a huge amount of money, and it’s important that it got sent out to the states,” Daines said. “And the intent of those important resources were not to be sitting in Helena with him, but to get them deployed as quickly as possible to every corner of Montana.”

Bullock countered he’s taken a “fiscally conservative response” to ensure the state has funds as the pandemic drags on and needs change.

“We still have four months left in this year to make sure that our businesses can not only stay alive, but thrive,” Bullock responded in an interview.

As the November election draws closer, both Daines and Bullock have been ramping up efforts to both highlight the differences between them and where they stand on the issues they would potentially vote on in the Senate.

Daines has warned that Bullock is actually a liberal Democrat who would work with national party figures on issues like gun control, abortion and taxes. He has also stressed his support for local Montana businesses and traditional industries like mining. That support for coal mining helped him secure the endorsement of Crow Tribal Chairman A.J. Not Afraid in late July.

The Republican grew up in Bozeman and went to Montana State before entering corporate sales, working for Proctor and Gamble and Greg Gianforte’s RightNow Technologies. The Bullock campaign has criticized Daines for working with companies that helped outsource jobs to other countries, but Daines has stressed his business experience helps him understand the pressures on businesses and what could grow the state economy. Daines was elected to the Senate in 2014, after serving one term as Montana’s U.S. representative.

Bullock grew up in Helena but left the state to attend college and later graduated from Columbia Law School. He returned to Montana to work for his now-lieutenant governor Mike Cooney in the Secretary of State’s office. He entered private practice after losing his first campaign for attorney general in 2000. He ran again eight years later and was elected attorney general, serving from 2009 to 2013. He won back-to-back campaigns for governor and briefly made a run for the Democratic presidential nomination in 2019.

Bullock centered his failed presidential run on the undue role of money in politics, a position that could put him at the forefront of the Senate on a critical issue.

“I would imagine Bullock would model what Tester did,” Johnson said, citing the senior senator’s support for veterans as his signature issue. “I think Bullock would cut a more moderate profile (in the Senate).”